In the Evergreen State, we have a lot of dry shade. Yes, it rains often, but we get a bad rap on the amount of rainfall. We typically get about the same amount of rainfall per year as Columbus, OH and Dallas, TX according to the average annual rainfall from 1949-2006. However, our annual rainfall is spread out over 155 days while Texas receives their rain over just 79 days. So, the areas beneath our huge Douglas firs, Western Red Cedars and Hemlocks get very dry. We all want to be good stewards of the water we have, so it is helpful to be acquainted with some plants that thrive in dry shade.

One of the best, hands down, is Epimedium. This great plant comes to us from two very different origins. The Asian varieties are choice plants, dainty and exquisite shade lovers, but they require moisture-they are not f 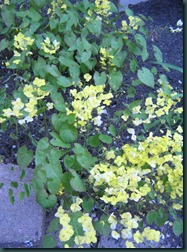 or dry shade. Mediterranean varieties, however, are very drought tolerant once established. These tough, hardy ground covers are evergreen, bloom in early spring, often with magnificent new leaves with bronze, copper and red tints. Epimedium x perralchicum has sprays of golden flowers and Epimedium x warleyense has orange blooms. Cut the old growth to the ground in early spring before the bloom stalks emerge to showcase the flowers and then enjoy a fresh flush of foliage.

ated version is particularly effective in the shade. The foliage turns a pleasing golden yellow in the fall. Lenten Roses (Helleborus) are terrific evergreen workhorses with exotic, frequently speckled, sometimes double blooms in the off season. They may bloom from February to May. Most asters languish in the shade but Aster divaricatus (aka Eurybia divaricatus) is native to the dry, open woods of the Eastern US. It is sprawly, with small but abundant white daisy flowers.

Goatsbeard (Aruncus) is commonly known as a large architectural plant topping out around 6’. Aruncus aesthifolius is a charming dwarf, with feathery leaves that combine wonderfully with larger, glossy leaves such as Hellebore or Asarum, a groundcover with glossy heart shaped leaves. The cream flower spikes dry on the plant and look attractive through frost.

Some hardy geraniums are suitable for dry shade such as G. phaeum and G. pretense. Geranium macrorrhizum, which is too vigorous for my garden, but somewhat more constrained in dry conditions.

Red twig dogwood (Cornus alba; C. sericea) is deciduous, but shines in the winter with dramatic red stems. The newer stems are more colorful, so you will want to cut 1/3 of the old stems to the ground each year to encourage new growth. The variegated C. alba ‘Elegantissima’ lights up the shade with white rimmed leaves, but other varieties may have more vibrantly red stems.

One of the most fragrant shrubs, Sarcococca confusa, is a shade lover. It gets 3-5’ tall and wide, has glossy evergreen leaves-wonderful for arrangements-and a vanilla /honeysuckle scented flower in winter. The flowers are insignificant in size but magnificent to smell. S. c. may require some extra water, but his little brother, S. hookeriana var. humilis, can take it dry. This is a 12-24” tall groundcover that spreads by underground stolon and shares the same tiny but fragrant

woody vine that will climb 60’ up a Douglas fir. Golden hops (Humulus lupulus ‘Aureus’) is slow to get started but once it is established it will glow in the dark. Don’t let the dry shade intimidate you! You can turn it into something truly beautiful.