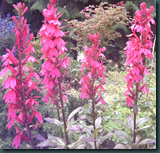 I’m a plant collector and I like all kinds of plants-but I must admit to favoritism  towards perennials. The perennial garden has its roots in England around the turn of the century. In the 1800’s, ornamental gardens used mostly annuals for bloom-these were called bedding plants. Of course, these had to be replaced every year. Gertrude Jekyll was one of the most influential gardeners of the early 1900’s and she popularized both the use of perennials and designs based on color schemes. At that time, perennial beds were very structured, usually containing only non-woody, blooming perennial plants against a hedge backdrop. 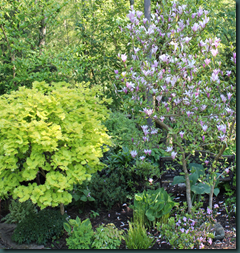 Today, the most popular type of ornamental garden in the PNW is probably the “mixed border.” These contain trees and shrubs along with evergreen and herbaceous perennials. The mixed border is popular because the tiered structure mimics nature and the evergreen plants and woody structures provide more seasons of interest than a purist bed of herbaceous perennials. Herbaceous means “herb-like”; that is, not woody; having stems that die back to the ground at the end of the growing season. Herbaceous plants are further divided into three main types. Annuals germinate, bloom, reproduce and die in one year. They are known for being easy to grow, long blooming and riotously colorful. Biennials bloom and reproduce in their second year and then die. They tend to reseed, which can be good or bad, depending on your preferences. A disadvantage of biennials is that they require an undisturbed bed for two years despite their somewhat unprepossessing appearance in year one. One alternative is to start them in a nursery bed and move them to the garden in the second year-if you have the room and the patience for such pampering. As I mentioned, perennials are my favorite. They live at least three years, but some outlive their gardeners. Peonies, 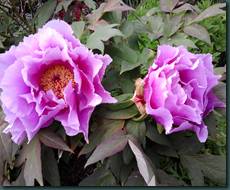 for example, commonly live 50 years or more and can live to be over 100. There is something very satisfying about planting something that will produce enjoyment and beauty for many years. Hardy perennials live through the winter in the ground, producing new growth every spring. Tender perennials won’t survive a deep freeze winter; some common examples are many fuchsia, gladiolus, some salvia, tuberous begonias and pelargoniums-commonly called geraniums. Remember that although a tender perennial may be killed by winter freeze that doesn’t make it an annual-because it does not complete its life cycle in one year. 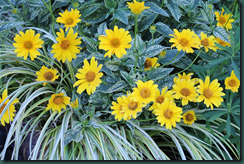 My preference for perennials is rooted (!) in my desire for efficiency and my delight in economy. You might notice that a single perennial may cost more than an annual of similar size. Do not be fooled! Remember that even if the annual performs well, you will have to replace it every year. In addition to the cost, also evaluate your expended time. Remember that you will have to go buy it (or grow it from seed) and replant it. If you buy a perennial, not only will it return year after year but you will eventually be able to divide it and produce new plants for no cost at all. 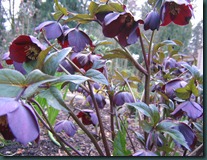 Some will point out that individual annuals frequently have a longer bloom period than specific perennials. However, with a little planning, you can have blooming perennials 12 months out of the year in temperate climates. One season of bloom succeeds another producing year round beauty.