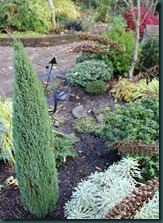 Several years ago I was working with a client who wanted a rock garden. The study and research I did in preparing to design that project kindled in me a love for dwarf conifers. Ultimately, I took the most prominent raised bed in my yard and re-imagined it as an alpine garden. That bed currently showcases 29 different dwarf conifers and I’m starting to cast my eye on two more beds that have suitable conditions. Dwarf conifers are mysterious. There are only a few that come to us from the wild: Pinus mugo is from the Alps, Pinus pumila from the mountains of Japan and Juniperus horizontalis is native to the Eastern US. Many times, what appears to be a dwarf form in the rocky, inhospitable wild becomes a towering giant when transplanted to a well-tended garden. 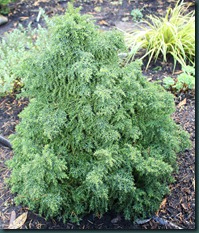 So, what is the source of dwarf conifers? Some are selected from the seed flats of commercial growers. There can be considerable variety of color, form and growth rate when many thousands of seeds are sown. More often, dwarf and miniature forms are shoots that are taken from tight balls of slow growing ‘witches broom’ found on normal size trees. Witches brooms seem to be a result of injury or pathogen. These shoots are grafted onto cultivated root stock and frequently retain their uniqueness. They may even produce diminutive cones with seeds that reliably produce dwarf offspring. There can be a lot of confusion when it comes to designating conifers as “dwarf”. Sequoia sempervirens ‘Adpressa’ is a choice dwarf of the coastal redwood. People are shocked when it tops out at about 75 feet tall, but  the species gets 300 feet tall. At its broadest, the definition of a dwarf conifer is “one that fails to attain the size and stature of the parent plant.” For my purposes, it has to stay a lot smaller than that! The American Conifer Society is recommending that these be called “garden conifers” as opposed to “dwarf conifers” in an effort to alleviate some of the confusion. In addition, the ACS has adopted the following four size categories for conifers:

Use caution when selecting your dwarf conifer. Names can be very perplexing and tend to be confused in the trade. For example, there is a group of Chamaecyparis lawsoniana labeled ‘Elwoodii.’ C. l. ‘Elwood’, a lovely blue pillar, may reach 15’ tall and 5’ wide. C. l. ‘Ellwood’s Pillar’ looks identical in the pot but matures at 4’ tall and 15” wide. There is also ‘Ellwood’s Pygmy’ (2’ tall), ‘Ellwood’s Nymph’ (12 feet tall) and several others. Ellwood was a busy guy. 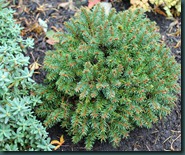 Make sure the plant you want to purchase is indeed slow-growing. It should have short internodes, which will show that it is growing at the Miniature-Dwarf rate. An open, loose structure indicates a faster growth rate. Slower growing plants tend to be expensive but not as expensive as buying a plant that quickly outgrows its space and must be replaced. In addition to categorizing the size of conifers, the ACS also defines shapes. Many people expect a conifer to be conical, like a classic Christmas tree. Conifers, especially dwarf conifers, come in many different shapes with exciting design possibilities:

Texture varies widely between and even within species. Hemlocks have short needles, Pines are quite long. Fir needles are stiff. Some Chamaecyparis have soft, touchable feathery foliage, others have stiff fans. Some conifers are loose and open, others tight, congested and dense. Dwarf conifers provide continuity through the seasons and contribute an incredible variety of form, size, color and texture to the garden-even in the snow. Flowering plants will come and go but conifers will endlessly delight you.