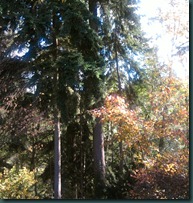 I live in the Evergreen State. Our state tree is the Western Hemlock. We have over 30 native conifers including varieties of Juniper, Cypress, Cedar, Fir, Spruce, Yew, Hemlock, Redwood, Pine, and Larch. There is little wonder that I am fascinated with these sturdy and beautiful botanical stalwarts. There are a lot of misconceptions about conifers. Did you know that not all conifers are needled nor do all of them bear classic, brittle, scaled cones? However, one thing is true of all co

nifers: they belong to a class of plants that bear naked seeds as opposed to the rest of seed bearing plants whose seeds are enclosed in ovaries. The class is Gymnospermae and contains three botanical orders: Coniferales which typically bear classic cones; Taxales, which includes the yews, bear less recognizable “cones”; and Ginkgoales which, obviously, is the classification for Gingkos -the only broadleaf plant in the class Gymnospermae. Conifers may be single trunked or multi-trunked. Most, but not all, conifers are evergreen. Larix (larch) are the most common deciduous conifers and, like Ginkgos, typically have colorful foliage in the fall. The immature cones are the “flowers” of the conifer. Most bear both male and female cones but a few, like yews and junipers, are dioecious. Yews and junipers are also different in that they carry their seed in structure that is botanically similar to what we would recognize as a cone, yet more resembles a fruit. The female cones have two types of scales; the outer is sterile and protective, the inner scales hold the seed. It can take up to three years for the seed to mature. Some conifers require heat, such as a forest fire, in order to disperse their seed. The ripe cones may be carried for 20 years before fire releases the seed to drop onto a bed conveniently cleared of competitive plants. 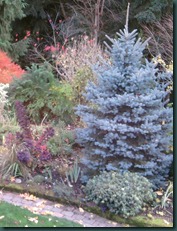 In the wild, conifers often live in poor, dry soil and sometimes summer drought, though firs and hemlocks tend to prefer cooler climes and consistent moisture. For an especially low water use area, choose pines or a conifer with glaucous foliage. The blue shade results from a waxy coating that inhibits moisture loss. Generally, conifers for the garden want to be planted in well-draining soil that is amended with some organic material. Avoid low spots and don’t position soaker hoses directly over roots. Most conifers are petulant about wet feet and will drop needles and look scruffy in that environment. Taxodium are an exception; commonly referred to as swamp or pond cypresses,they can be found growing natively in standing water. To a lesser extent, Larix and Thuja are somewhat tolerant of poorly drained soils. The best time to plant conifers is: not summer. Planting them in autumn through early spring will give them a chance to adapt before the summer stresses hit. Make sure to untangle any circling roots and that you do not plant it too deeply. Even if your new conifer will be drought tolerant, it will need consistent water during the first summer. 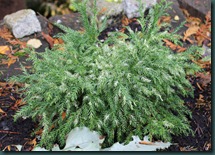 Although conifers generally prefer full sun, some of the variegated versions, especially the Cryptomeria, appreciate some shade. Also, Taxus and Chamaecyparis will tolerate some shade. Conifers need their space and will sulk if crowded. Branches will drop needles or even die if overlaid with neighboring foliage. Some needle drop is normal although most conifers don’t replace their needles each year like deciduous trees. Needles may last from 1-3 years, but eventually they drop; this is sometimes called “flagging.” As long as the new growth is strong, lost needles from old growth should not be concerning.

Conifers tend to be quite sturdy if not stressed. Notable stressors include poor drainage, air pollution, damage to roots or to bark and soil compaction. Give your conifers a suitable situation and they will give you year round, season spanning structure and beauty. It’s an excellent exchange.