I’d like to introduce you to some of the more eccentric members of the iris clan. These iris are all well suited to our misty, moisty PNW; several are even considered pond or bog plants. With a little fortitude, you should be able to hunt them down. Don’t forget plant sales, they are an excellent source of the more unusual flora. The Snohomish County Master Gardener Plant sale is usually the Saturday the weekend before Mother’s Day in May. Iris setosa var. arctica is one of my favorites. This tiny but lovely iris has grassy leaves and lavender to purple blooms with arresting silver veining. It’s ideal home is a situation where it won’t be crowded by larger plants, in full sun with moist soil. However, it is easy going and sturdy and will tolerate almost any soil, part shade and average moisture. This plant is native to Alaska, British Columbia and Siberia. Iris ensata (Japanese Iris) can  live in partial shade but prefers bright, sunny locations. Ideally, they thrive in moisture-retentive, acidic soils with plenty of humus but they will grow well in any decent soil if they receive enough water. They require high soil moisture and can even be grown in  containers in pond ledges. They are grown this way to great 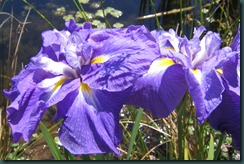 effect at the Oregon Garden. Apparently, in winter they are narrow-minded about standing water or even boggy soils where rhizomes may rot. Plants may be grown in pots sunk half way in water during the growing season and then removed for fall and winter. Iris foetidissima (Gladwyn iris) is well suited to the PNW. It is usually grown for its striking orange fleshy seeds in late autumn and early winter and not for its relatively insipid blue flowers. There is a variegated variety listed as a Great Plant Pick that is grown for its lovely evergreen white striped foliage because it rarely flowers and therefore, rarely sets seed. Iris chrysographes is the bewitching black iris. Some call it a Siberian iris but, although it is similar in appearance, it hails from China, not Siberia. It grows in full sun to part shade and, like the Japanese iris, enjoys moisture and can even be grown pond-side. Iris cristata (dwarf crested iris) is native to the United States typically appearing on rocky, wooded slopes and along streams. It prefers organically rich, moist but well-drained soils in full sun to part shade. It will tolerate almost full shade but if grown in full sun, the soil must be kept consistently moist. This is a vigorous spreader that grows 3-6” tall with nearly stemless flowers. If well pleased, it forms dense colonies that produce a spectacular drift of blue in the spring. The Louisiana iris originates, as you might expect, from the gulf states of the US b 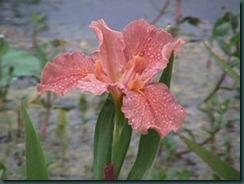 ut they are hardy to USDA zone 5. Natural hybridization occurred within five wild species originally found in the bayous of the Louisiana basin resulting in an astounding variety of colors and shapes. Not only hues of purple, blue, yellow and white are represented but also copper, peach, pink and almost red. Some have thin petals, some have upright standards, others are extremely wide and flat. I am on full hunt for this beautiful creature! Learn more about the history and origin of this fascinating plant at the Society for Louisiana Irises. They will grow in full to part sun and the wetter the soil, the more vigorous the growth. They may be grown in average garden soils but prefer moist soils or submerged in a pond. They are relatively heavy feeders and will enjoy a balanced fertilizer in fall and again in late winter. After blooming in spring, the plant will go dormant and you may trim the foliage back to 2-3” above the ground. Iris tectorum (Japanese roof iris) comes in shades of lavender and there is also a white form. It has fans of wide, ribbed leaves with a thin texture. It grows in full to part sun, but prefers woodland conditions with humusy soil and moisture. It appreciates compost in the fall and a light, balanced fertilizer in the spring, but is a sturdy and adaptable plant. Truly, these intriguing plants are worth searching for!