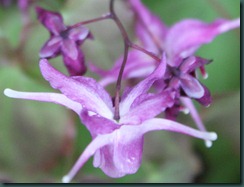 If you have discovered the versatile and lovely Epimedium, lucky you! If not, you are in for a treat. A member of the barberry family  (Berberidaceae), it has the same tough, sturdy nature as its relatives such as Mahonia and Vancouveria, both of which are native to the Pacific NW. Epimedium is commonly called barrenwort, fairy wings or bishop’s hat. Although often described as an excellent ground cover, this is only true for those few species that spread by elongated rhizomes. All Epimedium spread by underground rhizomes but in most species the rhizomes are short and the plants form dense clumps. Varieties native to the eastern Mediterranean tend to be drought tolerant and spread steadily by rhizome; those native to Asia tend to require more moisture and are best grown as isolated clumps. Epimedium species have little vulnerability to pests or diseases and are easy to grow. Most are native to woodland habitats so they thrive in light shade or morning sun in well-drained, moist, fertile soil. (Doesn’t almost everything?) The Mediterranean varieties can take more sun, especially here in the Pacific NW. Remember that even the drought tolerant varieties will need regular water for the first year after planting. If you have evergreen cultivars, you don’t want the dainty flowers struggling to compete with last year’s tatty foliage. You will have to figure out when the flower stems emerge so that you can cut the foliage to the ground before there is a risk of cutting off new flowers along with old leaves. For example, in my garden the time to cut back the evergreen E. perralchicum is in January. Then the flower stalks will appear first and lush new leaves will emerge below them. Epimedium × versicolor ‘Sulphureum’, is drought tolerant once established and spreads vigorously enough to be an effective ground cover. The delicate yellow blooms look just like racemes of tiny daffodils. The leaves are flushed red, especially in the spring and in the fall and the foliage grows to about 12” tall.

Epimedium x  perralchicum  ‘Frohnleiten’  is equally sturdy with more vibrant yellow flowers and more flushing on the new leaves. This variety grows in full sun with little extra water and blooms in February in my PNW garden. It is a vigorous but not invasive spreader. Epimedium × warleyense produces evergreen leaves topped by stalks of flowers in coppery red and yellow. These plants will spread, but more slowly than E. versicolor and E. perralchicum. The cultivar ‘Orangekönigin’ (Orange Queen) has a slightly paler bloom and is a Great Plant Pick. This plant blooms for me in late March to April. Epimedium grandiflorum ’Lilafee’ produces racemes of long-spurred, lavender-violet flowers in spring well above the foliage, which is deciduous in climates colder than Zone 7. E. grandiflorum is a bit larger-to 15” or so-and is native to Japan. It forms a tidy clump and is not considered a ground cover. 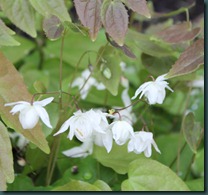 Epimedium youngianum‘Niveum’ is a dainty variety that grows to 6” tall and 12” wide with pure white blooms in May to June. E. youngianum is thought to be a hybrid between E. diphyllum and E. grandiflorum. The original plants were brought from Japan to Europe in the 1830’s. Epimedium are lovely with other woodland dwellers. For example, Heucheras come in a wide variety of foliage colors and are persistant through the winter. Think Heuchera ‘Marmalade’ with E. x warleyense ‘Orangekönigin’. That’s what I’m talking about. Helleborus provide a nice foliage contrast and bloom in winter, just before some varieties of Epimedium.  Other possibly concurrent bloomers are spring ephemerals, such as Trillium and Erythronium. Also, daffodils and other naturalizing bulbs are terrific

companions as the larger Epimedium varieties provide excellent cover for their fading foliage. Ferns of all kinds are an excellent textural contrast. A vignette I particularly enjoy combimes E. youngianum ‘Niveum’ with Hostas, Blechnum spicant and the tiny, frilly Aruncus aethusifolius. To propagate Epimedium, lift clumps in early spring or early fall and divide them with a sharp knife. Replant each division in well-draining soil amended with compost, and keep them moist while they settle in. Because, really, you can never have enough epimedium!