Actually, in the Seattle area the showers come September through July. We tend to have a very dry summer but it generally begins after July 4 and is frequently fades away before September is over.  Of course, the only thing reliable about weather predictions is that they are never reliable, so there you go. When I do get out there I have been potting and delivering plants for the Master Gardener Plant Sale at McCollum Park in Everett on May 1. I’ve delivered about 550 plants and have about 200 left to go. I have a particular spring vignette that I love that doesn’t even include blooms. I’ve planted Physocarpus ‘Coppertina’ 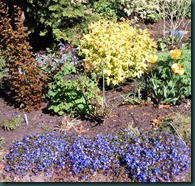 with Spirea ‘Goldmound’ and Heuchera ‘Marmalade’ and the grouping just pops against the dark brown of the compost mulch before the perennials emerge.  It is very satisfactory. I suppose it helps that bright blue Veronica peduncularis ‘Georgia Blue’ is beginning to bloom right in front of all that orange! The Rhododendrons are still putting on a big show. Believe it or not, R. ‘Taurus’ is still blooming down in the woodland. The blue rhodies are fabulously beautiful. Many of these-such as R.  ‘Blue Diamond’ and R. ‘Ocean Lake’-are descendents of R

hododendron augustinii. Augustine Henry was a Medical Officer with the Imperial Chinese Customs Service on the Yangtse river. He was instrumental in preserving and transporting new Rhododendron specimens collected in China by the French missionaries to Kew Garden in Great Britain. R. augustinii was named after him at Kew. Lathyrus vernus is a perennial sweet pea that is not a vine. This well behaved, long blooming plant has had flowers in shades of magenta, blue and purple for over a month. The Brunnera, mentioned as blooming last mon

th, is still sporting lovely forget-me-not poseurs.  From the same family as Brunnera (Boraginacea), the Pulmonaria has also been flowering for about six weeks. P. ‘Roy Davidson’ has blue and pink blooms on the same plant, along with silvery variegated foliage. P. ‘Blue Ensign’ has outstanding flowers of dark royal blue with silver spots on the leaves. P. ‘Silver Streamers’ has classic pink-fade-to-blue blossoms but the real draw to this variety is the almost fully silver foliage. P. rubra has salmon pink blooms. I love the Pasque flower for its unique foliage, flowe

rs and seed heads. Pulsatilla vulgaris may bear flowers in purple, red, or white, but the frilly foliage is the same in each case.  As an added bonus, the flowers turn into fluffy, silvery seed heads that persist all summer. On this plant, I like the seed heads as well as the flowers! When I started gardening, I thought that I didn’t like Bergenia, and not just because the common name is pigsqueak. Bergenia has lovely pink or white flowers on a stalk in early spring, but my favorite thing about this species is the thick evergreen leaves that turn ox blood red in the winter. Not all varieties have equally fine winter color, so try to acquire yours while in their winter dress. They also make a great container plant for the forgotten season. Speaking of interesting names, Ranunculus ficaria ‘Brazen Hussy’ is a favorite. Unlike the species, this variety of Ranunculus is not weedy. In fact, you may have to pamper it just a bit to get it going. This ephemeral emerges in February with glossy bronze foliage in a rosette just 6" high. In early spring, the clumps are topped with small but brilliant yellow flowers just 3" above the foliage. The contrast between the dark foliage and the yellow bloom is, well, brazen. This particular Hussy goes dormant by May, so be sure and mark your clumps so you don’t accidentally dig into them before next spring.